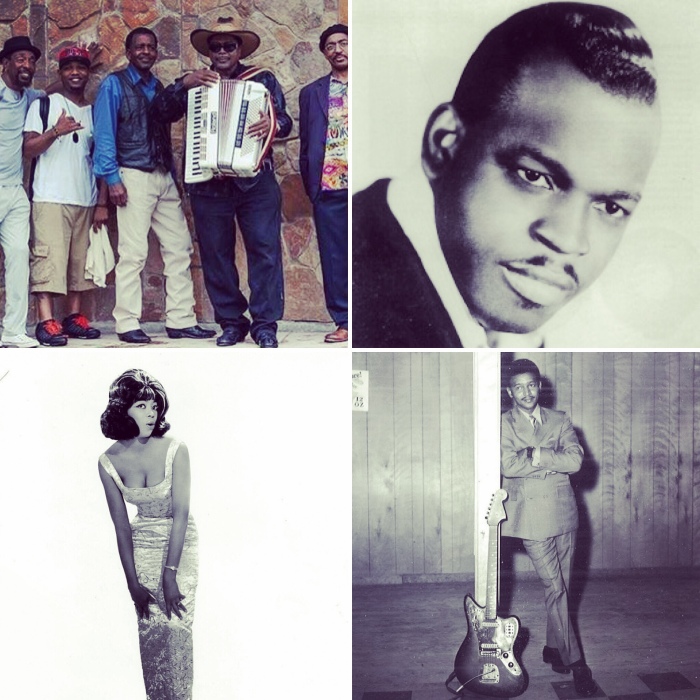 An inaction-packed couple of days leaves me little with which to entertain you peripherally–care to hear about my new crown or my crossing my own no-NFL-TV picket line?–so let’s get to the music.

Indeed, it is, as Al Johnson memorably sang (and still sings), CARNIVAL TIME! We always celebrate that in our house, and Sunday I lazily clicked on a YouTube playlist I made last February and ended up listening to the whole thing (at the expense of investigating any albums). It’s not half-bad, and it’s not just the well-known tracks, though those can be played endlessly. Let me offer it to you again–it features great songs from the above-pictured Nathan and the Zydeco Cha-Chas, Danny White, Lil’ Buck Sinegal, and Betty Harris (clockwise from upper-left). Bon temps roulez all the way into March!

The 2018 American Book Award winners for oral literature go way out, around, and inside the life and work of Baraka. It helps to have some of the poet’s oeuvre under your belt, but it isn’t necessary–you live in this world. Poetry-with-music of both a volcanic and bitterly hilarious nature.

Skeptics say you can’t tell wide-open free sessions apart, but when Willem Breuker’s in the house, even a neophyte listener’s earbrows are sure to be arched by distinct features. That title is perfect. With drummers by the name of Moholo and Oxley cracking the whip.

The newest offering from Strut Records’ Original Masters subscription series is the first juju record other than King Sunny Ade’s that I’ve ever heard. Though the keyboardist can overexpress himself cornily at times, Peters’ singing and guitar are more than within shouting distance of his more famous compadre.

Stax Singles Volume 4–Rarities and The Best of the Rest

One would think that by a fourth volume (and each is a multi-disc set) the compilers would be loudly scraping barrel’s bottom. Not so. Yes, there are some mediocrities, but the many delights (instro-rockers The Cobras–guy named Cropper on guit–Rufus Thomas delivering a miraculous “Fine and Mellow,” the Nightingales’ scintillating “A Little Overcome,” Hot Sauce covering Swamp Dogg, The Dixie Nightingale’s heart-stopping “The Assassination”) beach them in their wake. I am strange, but, not planning to, I listened to the whole thing in a sitting. Also: if you didn’t know, Jim Stewart and Co. recording a lot more black music than soul.

…and still out in my truck is good ol’ Sandinista! One thing I forgot to mention the other day is how wonderful it was that the boys shared their tracks with a church choir, a little kid, and Timon Dogg (humanistic, democratic outreach in action) and moved their vocals into the mix’s midrange. It annoyed the ever-lovin’ shit out of me when I was 19, but I was a dum-dum; I totally get it now, and it makes me smile! Miss ya, Joe.