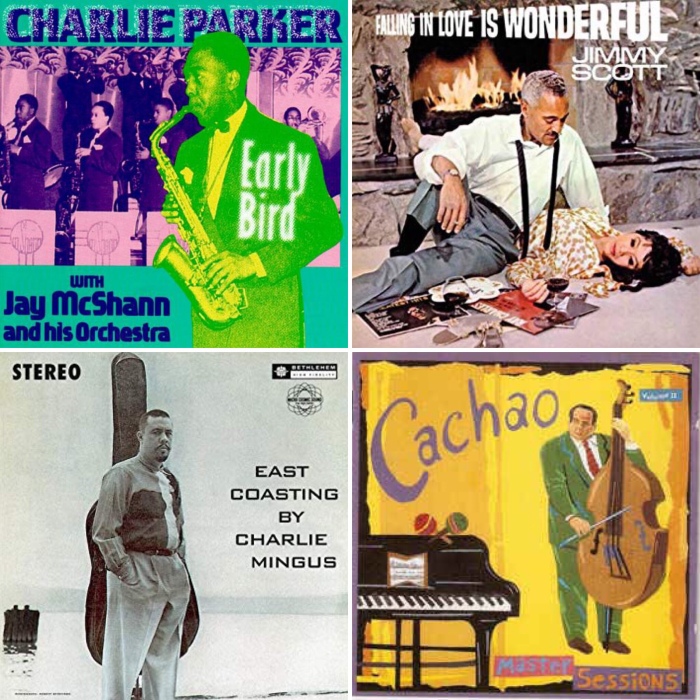 I’ve been in an unshakable jazz mood for the most part the last two days, with a nice boost from fellow phono phanatic and ace Cuban cook Jimmy Trotter. I’m telling you, if you’re ever in Fulton, Missouri, between 11 and 2 in the afternoon, find The Fulton Cafe and ask Jimmy what you need–he will tell you with great accuracy and verve, then serve it to you with relish. Yesterday? A Cubano sandwich for me, ajiaco for Nicole, and fresh fruit salad, sweet espresso and poached guava with cream cheese and crackers for us both! Damn, man! And on his visits back to the table to check on us, Mr. Trotter educated us on the band Acetone, which I will be reporting back on in a few days. As I left, I was moaning to him about physical media, and instead of commiserating like most everyone else does, Jimmy enthused, “It’s all about building the perfect collection, man.” Yeah. I digress, but when I got home I jacked the Cachao comp referred to below in the changer and cranked it, and went ahead and ordered that Patato & Totico LP I’d been hesitating about for three weeks.

For your listening pleasure, here’s a playlist sampling the records below–including the entire Cachao compilation.

Also, did you know Carnival season has begun? Get yourself loosened up Louisiana style with yet another Living to Listen playlist! Shuffle these 47 tracks and you will be lit and lifted.

The titular master’s tumbling lope drives these tracks, but guest Paquito D’Rivera’s alto sax and clarinet often shift the mesmerizing rhythm into a classical gear. Volume 1 is terrific, too, and dig Doug Erb’s cover art for both volumes!

A weird live document consisting of mostly soundchecks, with the late scoundrel audaciously (not to say successfully) singing the blues and covering George Jones. Like his fellow “poet” Robert Zimmerman, he gets away with some serious shit.

Take several pieces of Prince Far I’s band–like a lot of instrumental reggae and Adrian Sherwood productions these leave me a little cold.

Check out the number of artists listed on the cover (and, of course, their names), and you might question how much orchestral unity is possible. Skepticism is good. But these folks have great ears, and the move as a team–it’s a matter of expanding your idea of unification. A turbulent, dense, and exciting session.

The Kinks Are The Village Green Preservation Society

Cute, wry, attractively loose, tuneful, this album is certainly one of their best, and it’s got philosophical teeth, too. I was delighted to hear my wife humming along in the next room to several songs about impermanence. I wish “Days” had closed the original release, but at least it’s on my expanded edition.

A foggy, restrained vibe–in contrast to the hot, direct sunlight and nearly wild atmosphere of better-known Mingus sessions–conceals a classic unit (Hadi, Richmond, Knepper in particular) playing with great soul and power. One of the bassist-composer’s most underrated records.

The deft-fingered wizard from Memphis delivers his first solo session, and quicksilver would be an understatement in describing this ’50s solo session.

I wager many have checked this Stash-label recording out strictly as Bird-watchers and have come away gobsmacked by one of the best swing bands of the war years. McShann was the man for many decades; every American house should have a record the pianist plays on. The kind of blues Albert Murray vaunted as an aid to stomping out of the briar patches of life.

The album cover will not delight the #MeToo movement, but inside the jacket the man who influenced as many female as male singers is at his absolute best, stretching and bending a set of heartbreaking standards. With Ray Charles playing piano and label-head.

That title is a bit awkward, but Ware, a tenor saxophonist of gravid tone and wide beam, takes outward stylistically and upward spiritually. No gospel covers, unless Sun Ra’s “The Stargazers” counts, but a call is being placed to the beyond. Featuring Ware’s frequent partners Matthew Shipp and William Parker, with Susie Ibarra on drums–no slouches they.