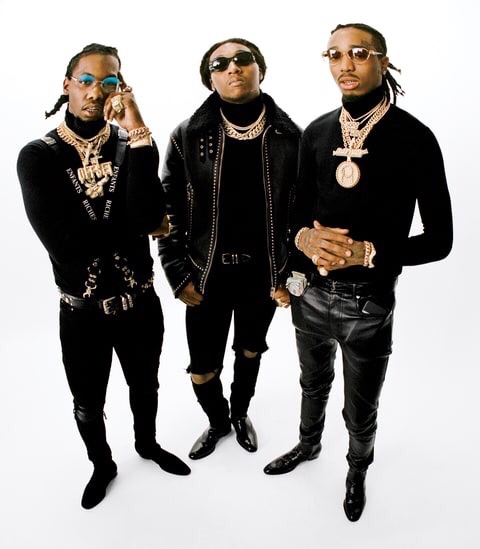 I am not easily drawn into popular music explosions. I’m stubborn-minded, distrustful of the taste of the masses when they are manipulated by market forces (snobby though that may be), a bit of a punk at heart, ignorant of the charts, and absent from the clubs. For example, for better or worse, I couldn’t care less about Taylor Swift; I know she’s talented, but I’m skeptical what she’d have to offer me, and I’m still not sure what business a 56-year-old man without kids has listening to her on the regz–a shade creepy, seems to me.

But Migos. So many reasons exist to steer me clear. Hugely popular (correct?). A bit susceptible to the wiles of materialism, and strip joints. A bit susceptible to embodying stereotypes. A bit too comfortable with the “n” and “b” words (am I an old fogey? or justly tired of hearing them trafficked?). Not exactly skilled rhymers or bar-constructers. Plus, there’s this. I participate in two Facebook groups that focus on hip-hop music and culture. As a white person, I’m in the distinct minority in both, and grateful that I’m free to comment, though I keep my head down to a great degree. However, as I learned early on when I admitted in one forum that I liked Young Thug and Bloody Jay’s Black Portland, the members are in near-unanimity in their distaste for and ridicule of trap rap in general and Migos in particular. Boiled down to the general, they scoff at what they perceive as an epidemic lack of MC skills, a paucity of compelling production, and a wackness of the soul. The preferred paradigm is often seems to be rap’s Golden Age acts (’88-’96), and I guess that resonates with me, as does the high standards set by the group (themselves in the minority where popular hip hop taste is concerned). Viewed through their rubric, Migos is trash.

However, they have me hooked. They are damned catchy; after my first time playing Culture (I listened to it today for about the twentieth time), “T-Shirt” and “Bad and Bougee” earwormed me pleasurably for days. They are very fucking funny, from their ad-libbed squawking to their outrageous scenarios to their often impenetrable exchanges (you know when you’re complaining that you can’t understand the words that you’re being coded out, a grand pop tradition). Folks do complain about the repetitive devices of trap production, but upon repeat listening I can distinguish songs within two-three beats every bit as well as I can with The Ramones or Hank Williams. Plus, such a pleasurable vibe results–a weird ethereality, a narco-state, a rhythm of relaxation–that, well, if this is trash, I’ll have another helping. Perhaps, to twist a Raymond Chandler phrase, without some trash a pop partaker cannot consider himself complete.

So, what about the vs. above? With some of the best pop music, things are never settled, and that just makes it more interesting. Seems to me that embedded in Childish Gambino’s now-viral “This is America” video is a clear critique of mass-consumed materialist culture as it dilutes the urgency with which we need to confront our violence. There’s even a representation of the minstrelsy that’s haunted us from the beginning of our music; there’s no question to me Donald Glover’s thought plenty about that complicated and destructive tradition. His proximity to Migos and the kingdom of trap music make the video even more fascinating–and make me wonder if the denizens of Audioblerds and Artists Lounge are right after all. “This is America” has unsettled me every time I’ve watched it.

Enough to wean me off Migos’ music? Maybe “wean” is too long a process under the circumstances. Glover’s participation in Saturday Night Live’s recent “Friendos” sketch only ups the speculative ante further.

I’m torn by this trio of kids from Atlanta. Could be by indulging in their art I’m culpable in my encouragement. Could be these are just foolish things never meant to be taken seriously. Too bad Oscar Wilde and Neil Postman aren’t around to help us parse it. But that doesn’t mean I’m going to quit trying. Or listening.