Skip to content
philovereem in Listening Diary May 2, 2018 757 Words 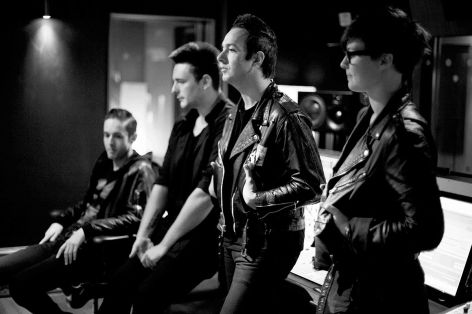 The nice thing about having the memory of so many songs in your head is that, so often, a pebble of a thought–a word or a phrase–rolls to the fore, settles defiantly, and won’t budge until you seek out a related line of a song you just have to hear. For me, on this day, a weather app on my phone set the process in motion: it’s just recently become spring-like in Missouri, blossoms are busting out all over, and I was checking just to make sure we weren’t going to get boomeranged by a cold front (again). The mid-evening forecast. Rain. Spring rain. Is change actually coming? Coming down like sheets? Wait–what’s that itch?

I tried to suppress it, but fragments of those phrases kept buzzing my brain. When I returned home from work, I headed for the living room stacks (there’s one in almost every room of our house) and just randomly (I thought) chose three CDs for the changer: Glasvegas’ eponymous 2008 debut, The Go-Betweens’ so-stellar-it’s-almost-toxic 1978-1990, and Rhiannon Giddens’ Freedom Highway. You will, I hope, notice that the alphabetical progress of those titles does indeed support my theory of (attempted?) random choice.

I loaded ’em up, flopped onto the couch with the Sister Rosetta Tharpe bio I am trudging through, and promptly read two pages, dozed, read three pages, dozed–then was brought bolt-upright by a chorus that came hurtling from the speakers:

The itch that will be scratched. The thought-pebble grown to a boulder that will roll away at the proper command:

Of course, I repeat-played the song! A wonderful guitar jangle of an opener, Robert Forster’s aching, utterly convincing lead vocal (haven’t we been there? yes, we have), and Lindy Morrison’s military snaps leading into and out of those words that were born today out of a weather forecast. (Don’t get me started on this compilation’s other treasures; better to get yourself started if you’ve yet to, and it’ll be a friend for life).

Quick observations about my other “random” choices: I really need to listen to Glasvegas’ other music, but I’ve been hooked on the Scots’ fledging effort since I first played it a decade ago. It’s not my usual cuppa–the attack is unabashedly romantic and straightforwardly pop–but there is something about the bits and pieces of rock and roll history from which  James Allen and his band construct songs, and about Allen and Rich Costey’s Phil Spector-cum-Steve Lillywhite production, that makes my knees weak. The tunes are memorable wall-to-wall, and Allen’s yearning tenor crying out from inside the grand sound-chamber is consistently affecting. As for Giddens, her past work has struck me as a bit too prim, pure, and proper–a mite flu-la-lute, as my old friend Cassandra would say–to sell her material and concept (whether solo or with the Carolina Chocolate Drops). However, I bought her 2017 record because, in that moment (January, I think), I felt like I was going to support anything defiant, and a glance at the song titles suggested that maybe, just maybe, Rhiannon would be angry enough to cut through her…I’m not sure it’s composure, but something like that. And she does, though I kept being bugged by how much it reminded me of a ’60s folk album (ultra-righteous in tone, very correct in selections) and figured I would return to rationality and dismiss it. HOWEVER, that’s yet to happen. I’ve played this sucker at least 15 times and it keeps getting stronger; the songs aren’t just correctly chosen, they’re audaciously chosen, and Giddens doesn’t trip on them). Believe me, I wasn’t sure anyone needed to be, for example, covering The Staples’ “Freedom Highway”–no point, you will not improve that any which way, young lady. But I’ve come to even admire that, on which she’s ably aided by another young, righteous, and talented artist, Bhi Bhiman. The damn thing’s won me over, and that’s that.

I am on a 33 1/3rd Series reading kick, and guess what book I’m picking up next?