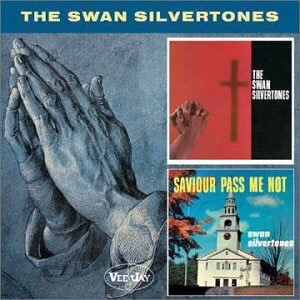 The Swan Silvertones. I’m here to tell you, few gospel groups in that genre’s impressive history can top their Vee-Jay label material. The great Reverend Claude Jeter’s tenor-to-falsetto sweeps point toward Al Green; Louis Johnson’s gravelled gizzard suggests a less refined Bobby Blue Bland; Paul Owens could have been a doo-wop star. In fact, the Swans had no qualms about blending doo-wop and barbershop ingredients into their holy testifying. Case in point?

Those three leads, backed only by a baritone and a bass singer (William Connor, the latter, is so aggressive at times that he reminds me of the instrumental bass passages on the first two Velvet Underground albums), a strummed guitar, and very occasionally some percussion. But they were a band.

Did I mention that they can lay claim to belonging among the first rockers? It’s a wonder this spiritually hungry number wasn’t secularized somehow:

Unfortunately, the Swans’ Vee-Jay recording aren’t that easy to find. For now, here’s a Spotified album I can’t speak to the source of, but…it’s the stuff:

It’s enough to make a committed agnostic like myself cry holy unto some lord.

For Stones fans of a certain age (mine), Mick Jagger carries no mystique. As much as I love the old monkey, I came of age watching him dance, mug, and clothe himself as he does herein:

Yes, I was among the 89,000 who saw The Stones rock the Superdome (their openers, The Wild Tchoupitoulas and George Thorogood, slew them). We were thousands of yards back, but I got to peep this on the Enormo-Screen (or was there one?):

Jagger is many things to me, and this is not damning, but he is not cool.