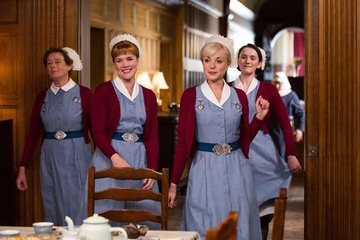 “There’s such a lot of slang in [American] songs, and their diction leaves a lot to be desired!”

So Shelagh Turner prissily scolds, as The Chiffons’ “He’s So Fine” wafts from the family’s car radio; meanwhile, back at Nonnatus House, Trixie, Barbara, and Cynthia are twistin’ and boppin’ along happily as the song beams its aural sunlight there. It’s the winter of ’62 and ’63 on Call the Midwife (Season 7, Episode 1, to be exact), and it’s so cold that great girl group tune is like a space heater.

I love pretty much everything about Call the Midwife: the cast, the unspooling of a particularly interesting time, the eye cast where no show has tread before, the centrality of working class lives, the camaraderie between the nurses, Sister Monica Joan’s savvy lit-quoting–its virtues are abundant. I particularly love the show’s soundtrack, of course, which functions in many ways, one of which is to reveal how the sound of English radio often reflected changes in social mores; up until the last season, we’d heard few people of color, but that’s gradually changing. A new midwife hailing from Jamaica may have an influence on the house tastes, as well.

As far back as Season 5, I’ve been waiting for the inevitable moment when The Beatles will enter the nuns’, nurses’ and other East Enders’ lives and shake it up. As Season 7 opens, the Liverpudlians have hit the charts; however, their first official Record Retailer #1, “From Me to You,” will be springing with Spring on May 2, 1963–four short months away. If The Chiffons are a threat to the very language the characters speak, and tingle-instigators in presently unspeakable places–well, unspeakable in this context, what havoc will The Fab Four wreak?

It’s funny–I just realized I’m behind. We have had to wait for the shows to become free for streaming on PBS, so the reader may know the answer already.

Don’t spoil it for me!

I am not a religious man, but I’d go so far as to claim my wife and I claim a feeling for the spirit of life. Easter was on Nicole’s mind, Dr. King was on mine (thanks to terrific pieces by in Sunday’s New York Times by Michael Eric Dyson and Wendi C. Thomas), and we chose corresponding music for our meditation.

Various Artists: Jesus Rocked the Jukebox–a grrrrrreat starter for someone interested in ’50s small-group gospel that lit the fuse for the rock and roll explosion and is still extremely exciting.

Aretha’s Gold–You know, she did what she could with her vocal limitations…

The Essential Ann Peebles–Give her some credit: she’s only one of the most exciting singers St. Louis ever produced!