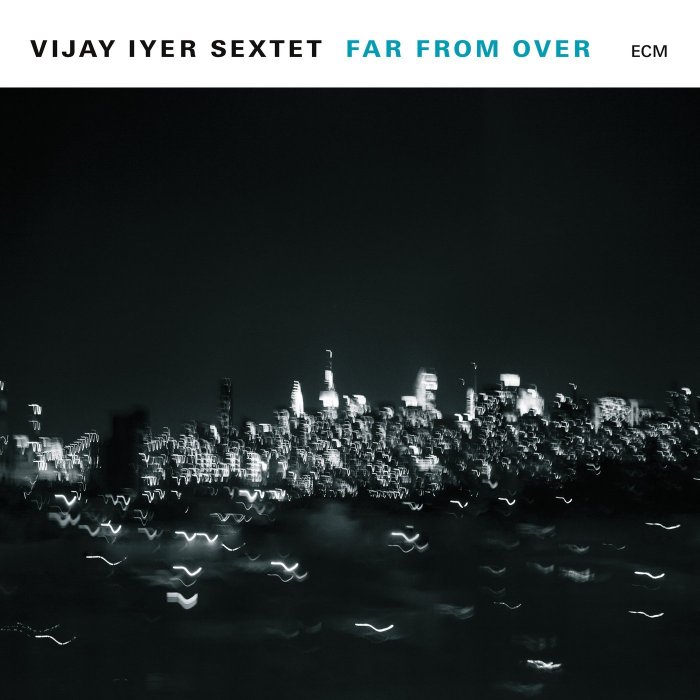 Ever listen to a record a few times, find it doesn’t stimulate you, relegate it to the very back shelf–then hear it months later and realize you must have been in a dullard’s state of mind? Perhaps it’s the Heraclitus Effect as applied to music: you can never listen to the same album twice.

This happened to me yesterday. I have been shedding CDs, I’ve almost reached the end of the process, but I keep finding discs that have lain dormant too long. I needed to refresh the CD box I keep in my truck, and scanning my new, relatively Spartan shelves, my eyes came to rest on Mr. Vijay Iyer’s 2017 release, Far from Over.

I am a big fan of Iyer’s. Both his compositions and interpretations are imaginative and challenging; he’s a very precise pianist who sounds to me as if he’s always got specific architecture in mind. Though he works with fellow players who are very much in the moment, and though I am sure both live and on record he makes spontaneous choices, the structures of his pieces are too complex and solid to be fully improvised (it seems to me, at least). I’ve been fortunate enough to see him live, and he’s fascinating to hear–he can turn a room into a kind of crystal palace, and that’s a compliment. Also, he has great taste in drummers. Often, of late, he’s worked with the magic Marcus Gilmore; in the past, and last year on Far from Over, the astounding MacArthur Genius Grant recipient Tyshawn Sorey has been behind the kit. Also, from his work with Mike Ladd to date, Iyer’s no stranger to artistic activism, and the title of his 2017 work has been understood to refer to his reaction to the 2016 U. S. presidential election.

So–what’s not to like? Well, I had played that sucker twice after it arrived on my doorstep, and (from what I remember) it had struck me as too ethereal, too static, and maybe too much of a good Iyer thing–in other words, maybe I’d reached saturation point with his work, which an experienced listener can indeed recognize from a good mile away. Also, the album was released by ECM, a label that I suspect has aimed diabolically, deliberately, and for years enmesh jazz fans in webs of cheesecloth, soft-focus sound. As such, it was a perfect candidate for discard, but I respected the man too much not to give it one more chance, particularly since it checked off a couple of very important boxes for me.

Good news! I was wrong! I must have been distracted, hung over, depressed–something–because the album, I’m now happy to say, is a minor classic. Why? Vijay’s playing has a simmering anger and defiance that keeps the promise of the album’s title, and sounds to me like another refutation of the complaint that his work is too cerebral (as if that’s necessarily a bad thing, and as if that complaint, in more base vocabulary, hasn’t been frequently voiced by our present administration). The band is equal to the mood: Graham Haynes (often evoking early-70s Miles on cornet, fluegelhorn and electronics), Steve Lehman (a criminally undercelebrated altoist), Mark Shim (on penetrating tenor sax), and Stephan Crump (truly one of contemporary jazz’s great bassists) are at their best here. Most exciting, though, is Sorey’s muscular drumming–the guy can do anything in the engine room, but I haven’t heard him in creatively raucous mode in a long while, and that mode is something to behold. And–bottom line–I am different now than a year ago: clearer headed, maybe understanding the meaning of “dug in” a little better, with more records under my belt (including Ernest Dawkins’ Transient Takes, on which Iyer plays slashingly on the 88s).

I’ll be holding on to Far from Over. Sample it yourself, but if you don’t believe me, give this festival set a listen, and you should hear what I mean.