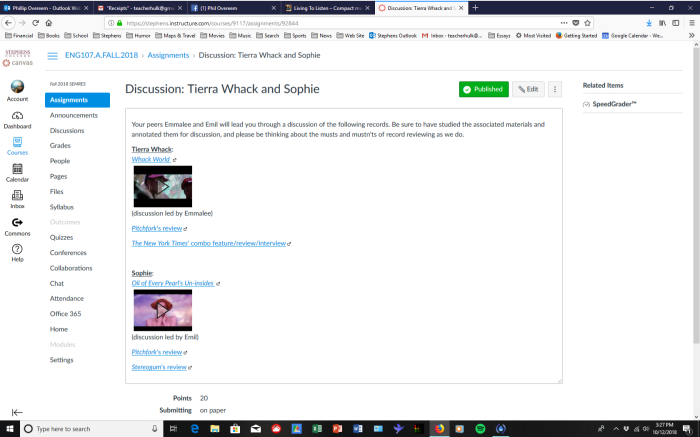 The on-site guidelines (with some context for the reader):

I’ve been leading these discussions and choosing the records, but a student asked if they could pick, and–why the hell not? The moderators in this case are the ones who chose the respective albums. A gender-bending anti-capitalist charter school advocate from St. Louis chose the Sophie album (which, in preparing myself for the activity, I’ve come to really like!) and a rural SW Missouri kid with a hearing disability who’s also the first college student in her family chose Ms. Whack. I will not participate verbally; I’m documenting the discussion, and their scores will be based on participation (they can gain some points simply by being attentive) and preparation (I’ve required annotated notes on their listening, reading, and viewing experience). This is a stepping stone to their writing reviews of their own, which Austin is also going to assist with.

…and Sophie’s Oil of Every Pearl’s Un-Insides:

Moderators (Emmalee and Emil):
Initiate, guide, and enhance the discussion—in other words, make your participation about inspiring conversation, involving as many folks as possible, and keeping it on track. You should mostly ask questions, not make statements.

General Participants:
• Have your notes out and mentally prepare for how you would like to enter the conversation, and use your notes to support your comments.
• Self-monitor: realize everyone needs to participate, so be specific and concise. Think twice about entering more than once.
• No hand-raising: wait for space and enter it with politeness.
• Do not interrupt speakers—but, again, speakers? Self-monitor.
• You are welcome to ask other speakers to clarify their opinions; moderators are expected to do this, but it is not exclusively their job. By the same token, you may invite students who seem to be struggling to get involved to enter.
This conversation is about exploring how best to review these albums, since that is your next task. Keep your commentary confined to what you’d write about these albums if you were required to.

My notes on the proceedings:

“…if were white, this’d be more popular…”

“…the silliness provides a neat contrast, or subtlety, or something for her serious thoughts…”

“…how does the short format impact her hopes for sales…?

“I found the abruptness, or lack of transitions, to be hard to deal with first listen, but the videos smoothed those out…”

“She’s so inventive musically and visually–you really need to watch the videos too–but she’s so fast it’s hard to process!”

“She’s a female Chance the Rapper…”

“Do you think she defies genre…?”

The moderator surprised me and went around the room asking each fellow student to offer an adjective to describe Sophie, which she listed on the board as a menu for her Socratic. At first, I was annoyed with her asserting that much authority over the rest of the group (she is a strong personality, and I’d asked her to temper that a bit for this activity), but she then receded back to her seat and the menu worked great!

“Is discomfort in reacting to an art a band thing…?”

“I love this album but it disturbs me… the music doesn’t fit into a genre, but she doesn’t, either…!”

“I was listening to this in the car by myself, and just had to turn it off and ask myself, ‘Is everything ok?’…”

“Now that I know she’s trans I LOVE THIS ALBUM!”

“She’s basically saying ‘Fuck you, I can change myself anyway I want to….”

“…it sounds like, with her music, she’s making the audience feel what it feels like to BE trans in public in this country…shook, yeah, but also beautiful and multi-dimensional.”

My last comment was, “Well, from now on I am just going to assign you material and have you teach each other–I do not appear all that necessary, and Socrates would agree!” Kind of joking—but kind of not.