On the off chance one of my blog-followin’ friends hasn’t heard much ‪#‎MerleHaggard‬ and would like to give him a shot now that he’s stepped on a rainbow, well…we all have our favorites, and he made a slew of albums, but I reach for these most frequently. On these recordings, he is in tip-top voice, his justly-famed band matches him move for move, and the material? I can stand it, but I can’t hardly. And that’s a compliment…

Same Train, Different Time: A tribute album to one of Hag’s idols, Jimmie Rodgers, the Singing Brakeman. It’s got narration, but frankly, I love it, because it’s from deep. The selections reflect Merle’s close study and, with both James Burton and Roy Nichols picking, things even get a little funky. It was a different time, and the singer will make you feel it.

The Way It Was in ’51: I do believe this is tragically out of print, but it’s one side of Hank Sr. covers and another of Frizzell tunes–with a heartfelt pair of Hag bookends. Short, sweet, and sung the hell out of. Sure bet: Merle + Lefty tune = double, triple, or homer. Impossible to get out or pitch around.

Presents His 30th Album/A Working Man Can’t Get Nowhere Today: Two tuff rekkids now on one disc. The Strangers at peak sting-and-swing, with Merle’s pen drawing a little blood. There’s a few clinkers, but the likes of “Old Man From the Mountain,” “Honky-Tonk Night-Time Man,” “Holding Things Together,” “Running Kind,” the title tune, and two gutsy songs about being white will make you forget ’em. Plus, as always: masterful covers of Wills, The Delmore Brothers, Kitty Wells, and The Hillbilly Shakespeare.

The Way I Am: This leads with a moving, autumnal take of Sonny Throckmorton’s title tune, and features a couple of ace originals–but best in show are a set of Ernest Tubb and Floyd Tillman covers woven together with love–those two pre-and-post-war honky tonkers could have been twins, in a way–and balanced expertly between impression and homage. 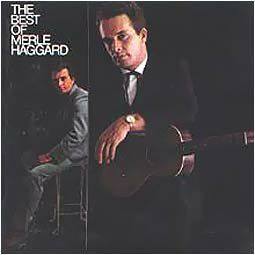 The Best of Merle Haggard: This was the first country record I ever bought, for $3, at a Wal-Mart, when I was still in my teens and didn’t know from country. Black cover, Merle in black, too–and, um, “Branded Man,” “Sing Me Back Home,” “Lonesome Fugitive,” “Swinging Doors,” “The Bottle Let Me Down,” “I Threw Away the Rose,” “Strangers.” It ought to be illegal to unleash that learning on a kid all at once. And that ain’t all: for emotional breadth and shifting masks, a great novelty (“Shade-Tree Fix It Man”), a scary spiritual number (“High on a Hilltop”), and a sleeper you don’t hear many folks mention, “My House of Memories,” which was the first time I realized singing required thinking (and listen to the way he sings the last word of its lines!). $3, over in less than 30 minutes, life changed forever. And let’s bring the needle down again, shall we?